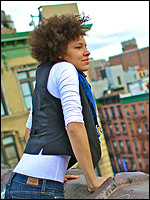 At age 23, Genesis Be has just completed her fourth studio album titled Mississippi To Manhattan. Utilizing what she has learned at New York University's prestigious Clive Davis Department of Recorded Music, Genesis took on the role of executive producer, writer, engineer, mixer and mastering engineer of the project.

Raised in Mississippi, Genesis Be comes from a family with strong ties to the civil rights movement and was involved with activism and protests since age 6.

At age 13, Genesis Be discovered her ability to write and deliver rap lyrics with unbelievable precision. Genesis' parents brought her to a recording studio where she met her first engineer and mentor Kenneth Leonard. Leonard provided engineering, mixing and mastering services for Doc Roc Recordings, who later signed Genesis Be to her first recording contract.

At age sixteen she produced a mix tape, 16 In America, which introduced her to the world of Mississippi's underground hip-hop scene. Her name began to be known around the Gulf Coast area and after getting radio spins for a song called "Why?" the young artist decided to record her first album with original music and titled it 17 In America. The single "Why?" was a powerful social commentary performed over the instrumental of 50-Cent's "Many Men." Upon release of 17 In America she was asked to perform with The Gulf Coast Youth Symphony at the Beau Rivage Casino. This performance launched a string of shows. That same summer, she opened up for several mainstream artists including The Ying Yang Twins, 8 Ball/MJG, Trillville and Lil Webbie.

She is due to graduate from this highly selective program, The Clive Davis Department of Recorded Music (at NYU) in 2011.

Genesis has blessed the stage at The Blue Note, Webster Hall, The Knitting Factory, Webster Hall, The Magic Johnson Theater, Sullivan Hall, The Bowery Poetry, Sin Sin Freestyle Mondays, Crash Mansion, The National Underground and the XR Bar among others.

Activists occupy a special place in my heart. Young activists passionate about making a difference, courageous about taking a stand for what they believe in – they are my heroes. Genesis Be is young and gifted and determined and focused and she is living her future right now. Amazing!

DR: Tell me about your music.

GB: Mississippi to Manhattan has basically taken 4 years for me to complete. I took on the role of Executive Producer, Writer, Performer, Mixer, Master and Engineer of the album. It's my journey, having been in the Clive Davis Department and taken what they have taught me and applying it to my music. It's a very interesting process. This is the first time that I have dug in technologically with the music, with my own music...

DR: What do you mean by that?

GB: As far as learning how to use software applications, pro tools and logic and understanding how to properly mix sound and master. I am still learning, for sure. People do this their whole lives...I have been taught by some of my mentors about how to use the software and I have a respect for them and everyone else who calls themselves an Audio Engineer. It's a lot of work and it takes a lot of time and not everyone has the ear for it.

This album is something new for me as far as a challenge. It's my fourth album. I am not a stranger to executive producing my own projects but taking on the role of mixer and master was definitely an interesting experience.

The album is releasing April 19th and I am really excited to see the response to it.

DR: Tell me about the message.

DR: You laugh. Why is that?

Genesis Be aka Lo-Key has been proving that kinky lyrics and skimpy outfits are not the only way to gain recognition as a “fem-cee.” Her 4th album Mississippi To Manhattan reflects her personal growth experienced since migrating to The Big Apple after her hometown Biloxi, MS was devastated by Hurricane Katrina. Project “Flood” will be implemented 3 month prior to and 4 months following the release of Mississippi To Manhattan. The album is set to release April 19th, 2011 digitally through iTunes, Rhapsody, Amazon and Open Sky Artworks official website. Regional physical distribution will be sought through either Koch or Red Eye Distribution.

All four of these songs are featured on the upcoming album.

GB: I laugh because some of my topics are very heavy but some are very light. It's just an all-encompassing view of who Genesis Be is.

I speak about this craze that my generation has taken on as far as this intoxication and wanting to drink and stay" fly and high"...I deal with that in a song called At a Stand Still and it basically takes a club approach. It's a club song but it's kind of telling the younger people who are listening that:

"Yeah it's okay to have fun and all that but you have to work hard if you want to get somewhere."

Staying drunk and intoxicated is not all good. You have to have balance. The media will tell you that this is what cool people do – they have sex a lot and get intoxicated and hang out in the club...Yeah we do that some times but what about the other side that is not being shown? The hangover. The STD's. Those things that are very real. People just want to show the youth one side and so they have a skewed perspective about the way reality is supposed to be and the way that they are supposed to be.

This album touches on both sides. I have club music and I have somber, deep, socially political songs. It's a good mix. It's a good healthy balance.

DR: So the music is representative of who you are?

GB: Yeah. I am a storyteller. I talk about other people's lives as well. It's not all about me. I am not talking a lot about myself but rather about reality from my point of view.

DR: Can you tell me about what some of your personal influences have been?

GB: Definitely my grandfather, Rev. Clyde Briggs. Just reading about him and hearing the stories about him sets an example for me about what it means to be a public figure and an influence and about how to mobilize the people around you for the betterment of your community. To be so passionate about wanting to make a positive change to the point where you are willing to risk your life and ultimately do give your life for it is definitely influential to me.

In terms of artists, or other famous people, Malcolm X is a really strong influence. Tupac Shakur was the main reason I started rapping. Left Eye. Lisa "Left Eye" Lopez...There are many. I could go on for a very long time.

DR: Tell me, is there anything that you would be willing to give your life for?

GB: I would be willing to give my life for the chance that the next generation could have a better life.

I am really passionate about empowering the youth and trying to get them to understand that they are worth more and that they deserve more than what our society has given them.

We live in a society that is about production and consumption and the youth is the main target and the main demographic to sell things to and we don't understand that until we reach a certain age so we might not understand why we are fed certain images and bombarded by these images, images that might not represent who we are. And so, we grow up in this confusion and insecurity as young people and I just want to be that person that tells them to take it with a grain of salt and be careful that:

"Their reality might not be your reality. If you don't see what you feel, you need to bring it into fruition."

That is my message to the youth. In order to bring that to them, I might run into some bumps but I'd be willing to sacrifice a lot for that.

DR: Tell me about Strive Till I Rise.

It's a brand. It's definitely a brand. We do merchandise and mixed tapes that we released. There is a website that young people can go to:

Young people can go to the site and listen to music and read stories that I think are important. They can go and check out voting sites and how to register to vote, how to see whose running in their elections. There is suicide hotline information and educational video links. It's pretty exciting.

I just did a seminar at Harlem Children's Zone a few weeks ago and it was amazing. I spoke to them about Social Entrepreneurship and what it means to be an activist. I'm excited to do more of that when I graduate, visiting afterschool programs and summer school programs and, block by block, city by city, class by class, introducing this concept of Strive Till I Rise.

DR: So you are graduating in a couple of months, you have an album coming out and you are busy with Strive Till I Rise, when you look down the road a few years where do you think you will be?

DR: Fill in the blank for me:

GB: In my life I hope that I will see the end of extreme poverty. I hope I will be able to make a comfortable living doing what I love to do. I hope I will see my niece grow up to be a beautiful and intelligent young lady.

DR: What is it you believe most to be true?

GB: I believe sincerely that everything happens for a reason and I know that I was put on this earth for a bigger purpose. That I have always felt but I know that I will not understand fully until I am a lot older.

DR: A Hundred Years from now what do you want to be remembered for?

GB: I want to be known as more than just a rapper. I know that for sure. I just want to be known as someone who lived my life completely free – mentally, physically and spiritually and I just hope I don't have to compromise too much in this industry...

Strive Till I Rise

Through workshops, College tours, online media, mixtape releases, block parties and art, STRIVE works to empower and educate the youth about voting practices, responsible consumerism, safe sex, how to positively exercise their individual influence and how economic trends can affect their college and career opportunities.We serve as a multi-media platform that exists to expose and empower the youth. We hope to encourage the youth to use their own power and influence to benefit their family, community and society as a whole. As consumers, we have to power to dictate what products are successful, what type of content is displayed in the media and even what policies our Local, State and Federal Government enact.

Visit Strive Till I Rise's website to learn more.