You are here: Living Louder | From Dana's Guests | Antiracist Essayist, Author and Educator, Tim Wise - Because They Hate: Health Care Obstructionism and the Conservative Mind 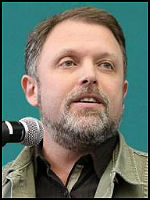 It's because they hate. There is no other logical explanation.

After all, it's one thing to oppose a piece of legislation and fight to keep it from being passed because you honestly disagree with it as a matter of principle. Decent people can disagree on policy.

But it's quite another to celebrate like frat boys at a keg party upon hearing the news that millions of people may now lose their health care, or that their care may become so financially prohibitive as to bankrupt them.

Yet that is what they are doing, and by they I mean pretty much the entirety of conservative America. Check out their Twitter spew, where you can see their nearly orgasmic delight at yesterday's 2-1 decision by an appellate court panel to the effect that only persons enrolled in state level insurance exchanges can receive federal subsidies for coverage under the Affordable Care Act. Since most states - especially those with conservative political leadership - have refused to establish exchanges, thereby forcing residents to turn to the federal version, the ruling (were it to stand) would mean that millions of Americans may no longer be able to access care under the law.

Decent human beings, irrespective of their take on a matter of policy, do not celebrate at the news that millions of peoples' lives could now be made harder. Decent human beings do not cheer and gloat at the news that millions of children could now go without care, or that millions of people may once again be forced to choose between health insurance they really can't afford, or paying a light bill, or buying groceries, or paying rent. Decent human beings don't put such a premium on political victories that they would purposely seek to harm people, deliberately make them worse off, intentionally leave them adrift with no real recourse to obtain care, possibly causing them, in many cases, to quite literally die. But conservatives in America do all of these things.

Because they hate. There is no other logical explanation.

There is no other logical explanation for why some among them would have even launched the lawsuit that ultimately brought about this result. Again, it is one thing to try and defeat legislation you don't like through democratic channels. They tried that. They lost. It's even OK, one supposes, to try and have the law deemed unconstitutional. They tried that too, and they lost again. What is not OK is to be so committed to the defeat of anything Barack Obama touches - even a horribly inadequate health care bill that, while better than nothing, is truly a mild reform - that you will launch a Hail Mary pass to judges you know are in your corner, hoping they will do what you could not at the legislative level. Because that what you're doing when you ask them to block the subsidies (thereby torpedoing the law), because of vague language in the legislation, even when you know that your interpretation of that language is certainly not what the law's framers and supporters intended.

The right knows full well that the drafters and supporters of the ACA did not mean to leave those insured on the federal exchange out of the subsidy pool. They know that the failure to include them explicitly thanks to confusing and under-inclusive language was a clerical error, not a purposeful choice. And yet they have pounced on this technicality - thus flouting the intent of the law's framers, in violation of their normal bellowing that we should always follow the intent of lawmakers rather than "legislating from the bench" - as a way to deny millions affordable care. Not because they have a better plan (or any plan) to provide them that care, but because they hate.

First, they hate Barack Obama. This is why they disrespect him in the middle of speeches by shouting at him and calling him a liar. This is why they refuse to shake his hand. This is why they don't challenge their constituents when those constituents call him a secret Muslim or terrorist. This is why so many of them - including at least two-thirds of Republicans â€“ indulge the lunatic notion that the president is not an American at all. This is why they send around all manner of blatantly racist e-mails with the president made to look like an ape, or pictures of the White House lawn covered in watermelons, or carry signs calling him a "Lyin' African,", or picturing the president dressed like an African witch doctor with a bone through his nose. This is why, most recently, a right-wing policy analyst for an anti-immigration think tank told Tea Party activists (much to their delight) that being "hung, drawn and quartered" would be "too good" for the president, and that perhaps his head should be put on a stake.

It's why they argue he probably wasn't qualified to get into Columbia or Harvard Law - in other words, it had to be affirmative action - and why they say he looks like a "skinny ghetto crackhead." It's why they accuse him of "appeasing his Islamic overlords," or planning to confiscate the land of white farmers, just like his "personal hero" Robert Mugabe did in Zimbabwe.

Not because any of that is rational, but because they hate.

But worse than that, they hate the people to whom they would now deny health care. There is no other way to understand their glee at a decision that, if it were to stand, would cost millions of people affordable care, literally devastating their lives and the lives of their families. How could you celebrate that outcome unless you despised, utterly reviled, absolutely detested the people who would be harmed? After all, it's not like you have an emergency bill waiting in the wings that would cover all those folks, regardless of pre-existing conditions, once they are no longer covered by ACA. Of course not (indeed, prominent conservatives insist that requiring coverage for people with pre-existing conditions is "welfare" and "nonsense," which should not be part of health care policy). No, no alternative plan, because to the right there is no need. Conservatives will be content to leave folks twisting in the wind, just so they can proclaim Obamacare a failure, tarnish its namesake's legacy and hope voters will punish Democrats at the polls. In short, political victories mean more to conservatives than the actual lives of poor and working class people.

Not that this should surprise anyone of course. These are people who regularly insist that the poor are "too comfortable" in America, and are like animals who become spoiled when you feed them. So presumably, instead of nutrition assistance programs for such individuals, the poor should simply get their food from dumpsters and be made to feel shame for their poverty, and utter embarrassment for having to rely on any form of government aid. These are people who inveigh against the roughly one-half of Americans who don't make enough to pay income tax, by calling them loafers, or "takers" (rather than makers) and suggest that they prefer government dependence to hard work. These are people who openly suggest that those who don't own property or don't make enough to owe income taxes - like millions of the working poor and elderly - shouldn't even be allowed to vote anymore, and that poor kids should have to sweep floors in the schools in order to get subsidized lunches.

But something about this is even more disturbing. After all, that stuff is just rhetoric, however toxic. But this is deadly and concrete. Not words, but the policy equivalent of sticks and stones. It takes a special kind of evil to do what the right has done since the passage of the ACA. First, refuse to expand access to Medicaid for poor folks in your states, then resist setting up state insurance exchanges, and then when residents are forced to enter the federal exchange, sue in order to prevent those people from being able to get subsidies that would make care affordable for them. In short, tell the poor and working class, it's too expensive for the states to cover you, and we're not going to help facilitate private coverage for you in our state either, oh and by the way, we're also not going to let you be covered by the feds. Thanks for playing: Go die.

There is only one reason someone would do this or support this.

This is what evil looks like. Pure, unadulterated, irredeemable, cannot-be-worked-with-or-reasoned-with evil.

This is a kind of contempt for the have-nots unseen since the days of Charles Dickens. It was Dickens, remember, who crafted the unforgettable scene in A Christmas Carol, where Ebenezer Scrooge spurns the request for a charitable donation, wondering aloud if there were no longer workhouses or prisons for the poor and needy. In other words, why care for them? Put them to work, lock them up, or even let them die so as to "reduce the surplus population."

But here's the thing: When Dickens created Scrooge, it was clear not only to the author himself but to all of Victorian England that Scrooge was the asshole, the heel, the soulless, cruel and vicious villain. He was decidedly not the deep moral philosopher, the hero or the person to whom readers were supposed to look for political insights.

A decent people would be ashamed. Which is why virtually no conservatives will be.