Lower Manhattan. I’ve lived in New York for the past 15 years

What do you do for a living:

I work in film.

I own a production company with my partner Lukas Hauser. I am a director and a producer. I am also an editor. Our projects range from films, documentaries and various kinds of commercial work. We do a lot of web videos and music videos and Public Service Announcements.

I am mostly a director my partner is more of an editor. My favorite thing is to direct because I like working with people.

I am currently working on a documentary called Generation 8 with Timothy-Greenfield Sanders. It is about the state of The Gay and Lesbian Rights Movement post Proposition 8 as it looks like the case is heading to the Supreme Court.

What is that about?

It’s a novel that is dear to my heart. The story takes place in the 1980s in the East Village of New York City and captures a scene and a time in the downtown New York art scene that I caught just a glimpse of, just the end of, when I first moved to New York. That scene is the reason I fell in love with The City. There was such an incredible alive vibrant creative energy here back then. You would go out and on one side of you there would be a millionaire and on the other side of you would be a starving artist. Kids could come to New York with nothing but a dream and the cloths on their back and find a way to make it here. Unfortunately New York became so expensive that it squeezed out a lot of that creative energy. It’s not so easy to chase a dream here anymore.

The City of Shy Hunters captures the spirit of the city that I fell in love with. It also takes place during the onset of the AIDS crisis.

The new generation of kids has really kind of forgotten about or hasn’t had the experience of the AIDS crisis but I think it’s a story that is worth telling and worth remembering...

What feelings does the question “What do you want to be remembered for in 100 Years” drive up for you?

Just to be remembered at all would be a lovely thing...

My grandparents have left an impression on me. There have been many artists and writers who have left something in the world that are important to me or moved me in some way…I don’t know if I will have an impact, either in a personal way or in a larger way. I don’t know if I’ll be able to leave behind a film that I have created that will still move people, but I sure hope so. That would be wonderful...

Could you identify something for me that for you represents this particular time that we are living in?

Well, we were just talking about the movie Social Network. I don’t know if Facebook is going to be the symbol of where we are right now but I think that there is something about being able to put out into the world your thoughts or your images that is unique. And, being able to find some kind of audience of people who are interested in what you have to say...

We are able to have an impact, much more now than people in the past. Our methods of communication have changed so rapidly. It used to cost hundreds of thousands if not millions of dollars to make a movie and now someone with a good story can get a camera and make something inexpensively and have it look great and get it out to the world, whether that is on Facebook or Youtube.

Alternative modes of distribution are now available. As a film maker that can be a big challenge because now there are a lot more people out there but its also really exciting to be able to hear from a much more diverse group of voices. 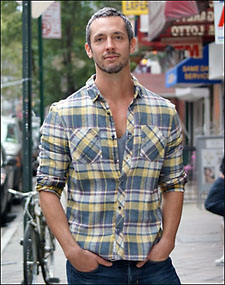 In 100 Years I hope that we have learned to live with each other more true to our nature, which I believe is one of goodness and respect and tolerance. Whether in regards to the recent suicides because of school bullying or global conflicts that are escalating around the world, I hope that we are able to live more in harmony with what I believe is our true nature – goodness.

It’s interesting when you consider the miners in Chile that were just rescued after almost three months of being buried miles underground. They had to work together in harmony in order for everyone to survive. They are a demonstration that it is possible to yield to our good nature...

I think there is a real culture of self-advancement. There is a real belief that people have the power to create anything they can for themselves as long as they think it hard enough or have a strong enough desire for it. I think that is really dangerous. It’s really “me” focused and that kind of thinking leads people to forget that they have a responsibility to help others.

100 Years from now what do you want to be remembered for? There it is Sam! There is “the question”!

My relationships with my family and friends have provided a life that I love. I am so grateful to the people in my life. I hope to be remembered as a loving son and brother and as a loyal friend. Beyond that, I hope that I can leave some kind of mark in the work that I do.

There are two areas of work that I am most interested in. One is socially relevant work. I mentioned that I am working on a documentary right now called Generation Eight with photographer Timothy Sanders. I am hoping that this film has the potential to impact the world.

The other realm of work that I really love is Fiction filmmaking. I have been touched and moved so much by films in my life, just getting lost and transfixed in a story and totally connecting with the emotion that the filmmaker has led me to. That has been such a profound experience. If I am able to create something that has that kind of power, that would be really exciting.

I had a teacher in college whose name was Thomas Roma. He used to say:

“To make something that has real meaning can either make you remember something that is worth remembering or create a new experience for the viewer”.

If I could do one of those two things and be remembered for it, I would be very happy.