I was born on a farm in Central Main, I grew up in Boston, went to high school in Connecticut and I have lived in New York for the last twenty years

I run a flea market called The Brooklyn Flea

100 Years from now what do want to be remembered for?

As of today, I would most like to be remembered for helping Brooklyn, in a general sense, become a place that more people travel to, and a place that is easier to be successful in, for the people who live here, as they try to pursue their passions.

I want to help lead the charge that puts Brooklyn on the National and International map, so that it can thrive as an entity onto itself within New York City, rather than being the “step child of Manhattan”. That just kinds of threads together a lot of the different things that I am working on.

Is there one thing for you that represents this particular time that we are living in?

The explosion in Connectivity - the way people feel connected, to me, is the defining trend of this moment we are living in.

The idea of being connected is what has evolved. Now we actually think about being connected whereas before we just knew the people we knew and we did the things we did. We are so aware now that what we are doing will have an impact on others or that we can learn what someone else near or far away from us is doing. The concept of this new connectivity has changed the way our minds work.

Do you think that allows for you to be more creative or more ambitious in your thinking?

I think it has more to do with speed than scope for me.

I hope that the connectivity that is defining our era brings people closer together. I just hope that it can be used for good and that people can feel close to each other even if they are different. 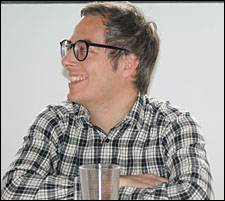 I don’t like the way difference is used for bad. I don’t need it to be used for good. I am not one of those people who thinks we have to always be celebrating diversity. I am just hopeful that people will one day overcome the presumptions that just because someone is different that they are against you.

What do you think will still be here in 100 Years?

I think that people will still be thriving for closeness with each. I think that if we can live through ten years of the Internet explosion and have already seen a backlash where people want to spend personal time with each other instead of online time with each other – that pendulum has already swung after ten years. The idea that people want to be close with other people will always remain. That is the power of good as it fights against the power of bad. I don’t like to call it evil because I don’t think of people as evil. I do think that there are good and bad things in the world.

100 years from now, God knows where we will be...I think the things that will remain are the human compulsions and the most basic one is the desire to maintain closeness with other
people.

*All The 100 Years Project photos are taken by Dana Roc.